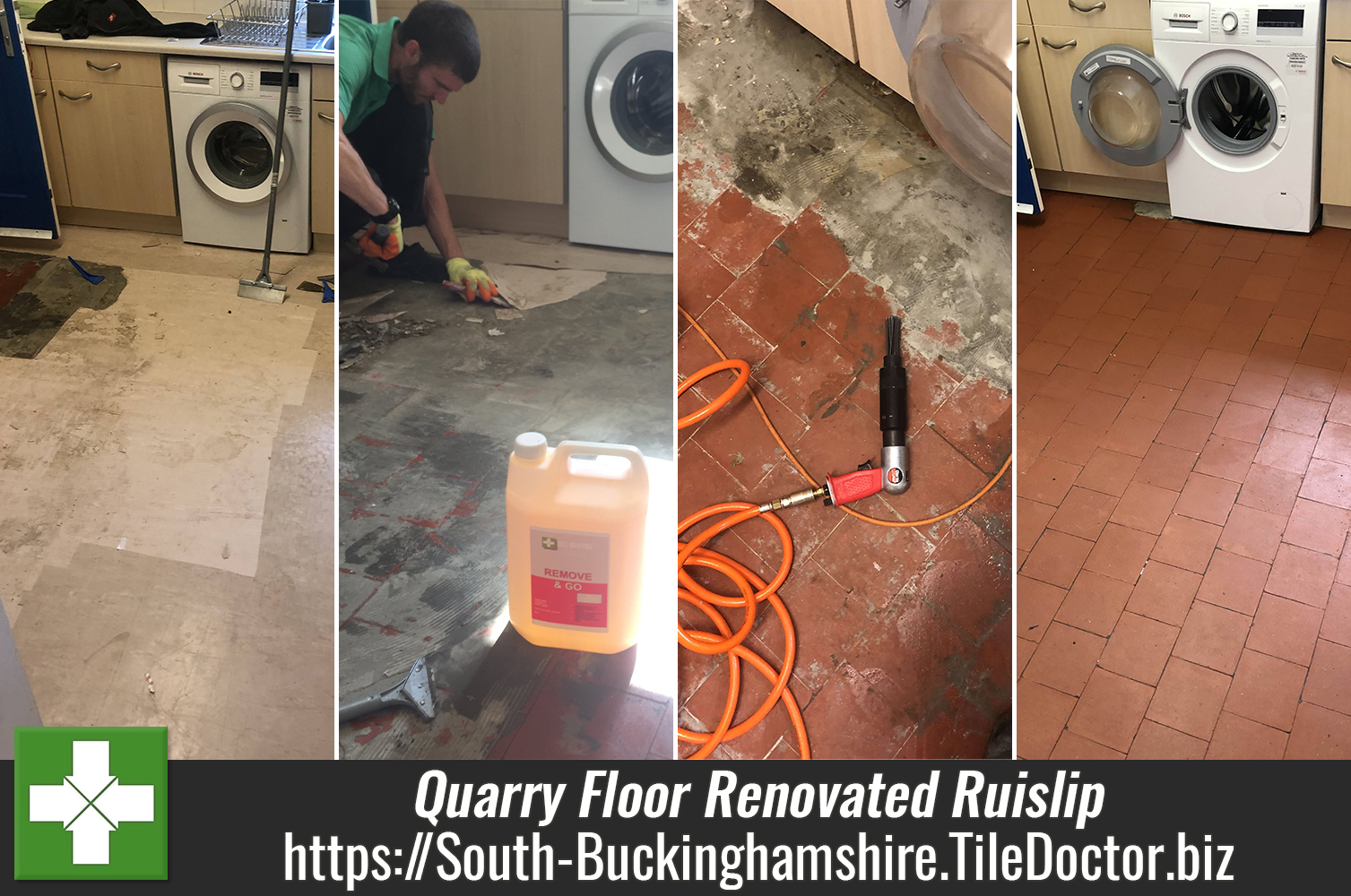 This client in Ruislip had discovered a Quarry tiled floor hidden under two layers of old (and now horrible) lino. Unhappy with the Lino she decided the best thing to do would be to investigate having the Quarry tiles restored. It is amazing how tastes change over the years and classic period floors are definitely making a comeback. Period features like these are quite sought after and can add a lot of value to a property, so restoring it was a wise decision and worth investigating.

On inspection the lino was well stuck to the tiles, it was clear it would take some time to lift and we wouldn’t know what to fully expect beneath until we started work. Non the less I gave her a quote for the work which she was happy to go ahead with and a date was booked in the diary.

We started by removing the lino using various methods such as scraping, cutting, and pulling always mindful not to cause any damage to the tiles underneath. Unfortunately, the lino had been secured in place with strong adhesive so once we had removed the lino we were left with a thick layer of glue and a thin concrete screed that had been used to level the floor. 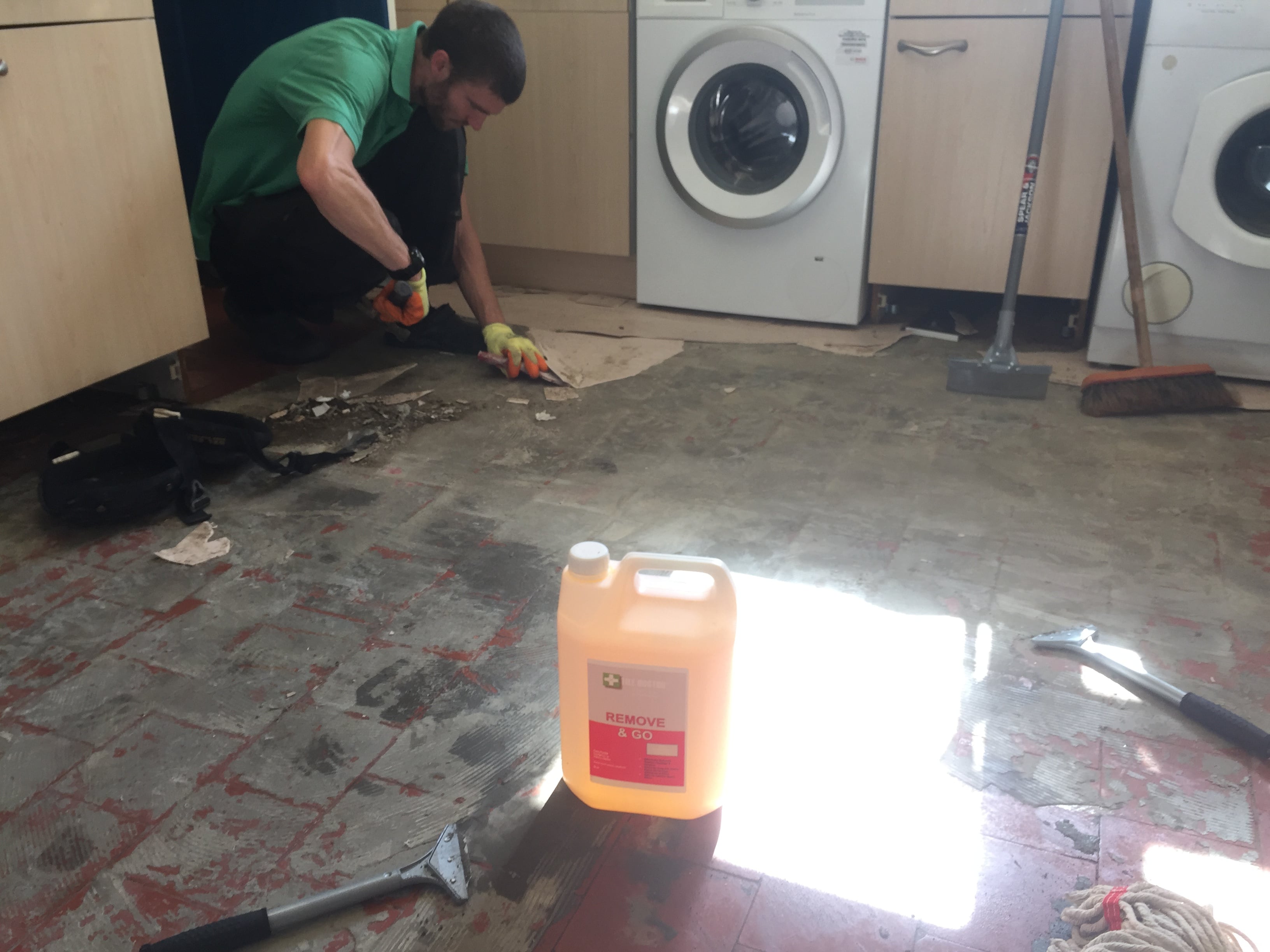 To deal with this the floor was soaked in a strong dilution of Tile Doctor Remove and Go which was left to dwell for some time before being scrubbed in. We find doing this gives the product time to soften the compounds making it easier to remove. Hands scrapers were employed to scrape off the glue and again care was taken not to damage the tile. The process had to be repeated to get the glue off but overall, it did a good job dealing with the glue and cement.

Once the Quarry tiles had been exposed however it was clear more work was needed to clean them up. The main problem was cement residue, so I used a combination of Tile Doctor Acid Gel, steam and a needle gun to remove the rest of the screed from the floor.

The floor really did need a lot of work to restore it!

Once all of the cement was removed the floor was given a thorough rinse with water, the soil was then extracted with a wet vacuum and once I was satisfied it was as clean as it could be the floor was left to dry out overnight.

On the second day the floor was first checked for moisture using a damp meter, its not a good idea to add sealer to damp tiles as it will effect the result. I was satisfied the floor was dry and began the process of applying a couple of coats of Tile Doctor Colour Grow tile sealer. This is a colour intensifying sealer that will protect the Quarry tiles by soaking into the pores and occupying the space thereby preventing contaminates becoming ingrained in the tile. Additionally, Colour Grow is a fully breathable sealer which is an important consideration when sealing old floor like these which need to breath. Being covered in Vinyl for many years many also have trapped moisture under the floor. 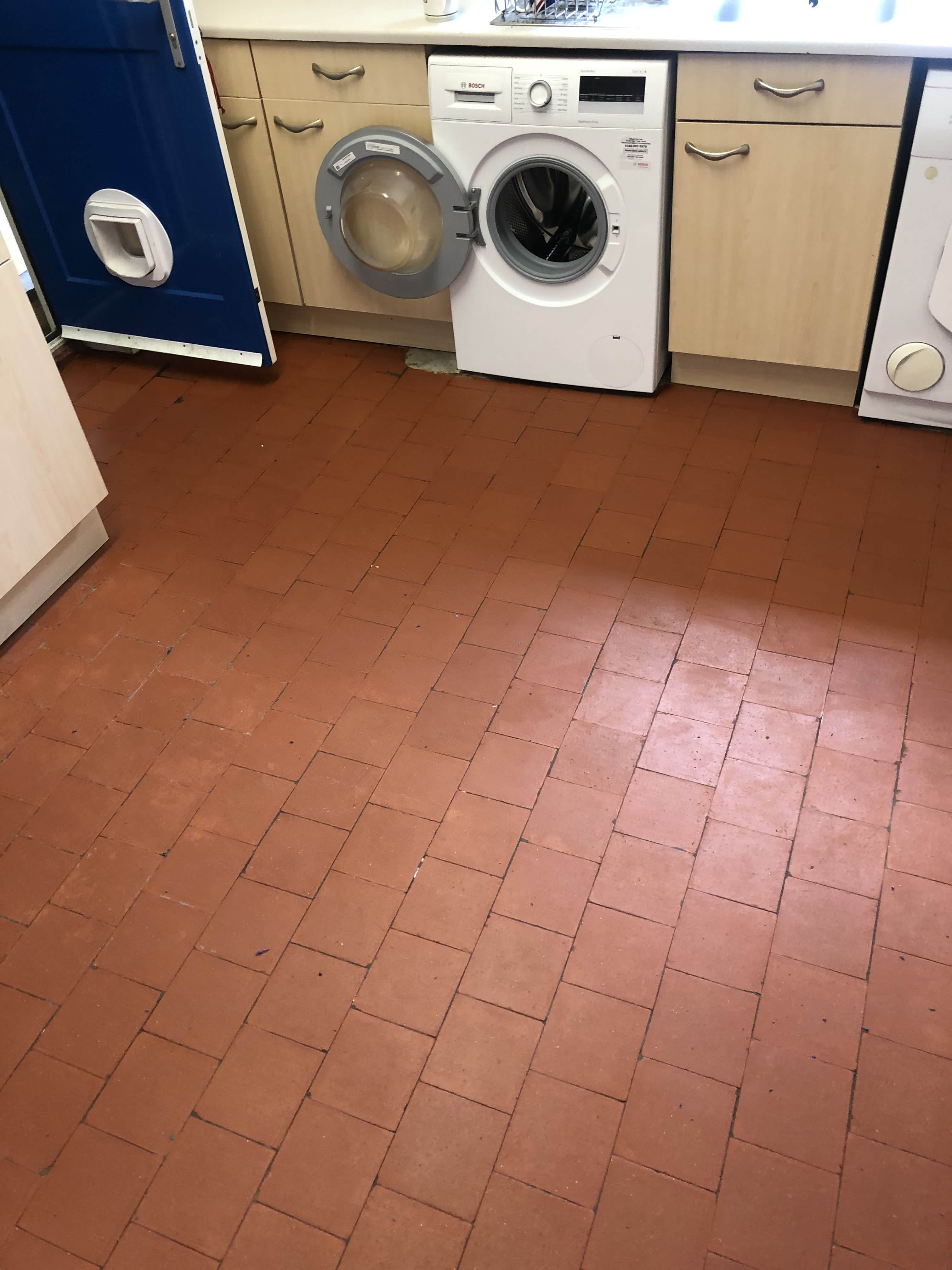 The newly revealed quarry tiled floor responded amazingly well to the restoration and once the sealer had drier the Quarry tiles had a nice sheen appearance without looking too shiny. It was a lot of work but well worth the effort and my customer was delighted. For aftercare I recommended cleaning the floor with Tile Doctor Neutral Tile Cleaner, this is pH balanced and will ensure the newly applied seal lasts and is not compromised.

Professional Restoration of a Quarry Tiled Floor in South-Buckinghamshire 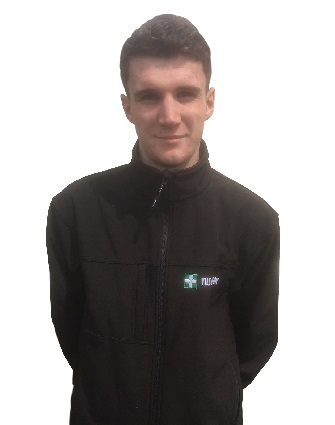 The flagstone floor in our dining room had never been professionally cleaned or sealed and had started to flake quite badly in a few places. Andrew suggested a deep clean and milling the floor where the flaki g had occurred. On day one he came with his colleague Jackson Davis and they worked hard constantly all day until they achieved the result they were happy with. On day two Andrew returned to check now the floor had dried out and carry out any further work need. He returned on day three and applied three coats of impregnator. We were amazed to see that the grey bleak flagstones we had before now showed colours we never knew were there. Andrew had explained the whole process beforehand so we knew exactly what to expect and was very neat and tidy whilst carrying out the work. A very professional service and we would not hesitate in using him again.
Diane T, Dinton

Fantastic service by Andrew and Jackson. Our Limestone floors have come up amazingly well, it has really exceeded my expectations. Overall very good value for money and I would definitely recommend. Keep it up guys!
Michael D, Clerkenwell

Our tile doctor was Andrew Newstead and not Jackson Davis. He has just completed regrouting, cleaning + resealing our limestone floor and he was excellent. Easy to communicate with, punctual, hardworking and delightful to have around. Our floor looks like new and I would highly recommend Andrew.
Marie C, London

Andrew called within 24 hours of my initial enquiry to discuss the work required.His visit to discuss the work was both educational and informative; the options were discussed and agreed upon; throughout the work, Andrew kept us informed of what was going to happen and by when. The end result has taken the tiles back to what they looked like when they were new. I can highly recommend Andrew …a great esperience.
David M, Northwood

Andrew Was thoroughly professional and gave us a good indication that the products would achieve the desired affect on our 25 year old slate floor. He worked hard over two days to clean and treat the floor and. . . we are very pleased with the result.
Meryl C, Chesham

Andrew responded quickly to my enquiry and arrived promptly, they did a great job bringing my kitchen and hallway grout back to new, the boys worked really hard and I think represented good value for money. Will get them back annually from now on to keep on top of it!
Clary G, Chalfont St Giles

Andrew did a great job in restoring our slate patio. Very pleasant and professional and always on time. Would recommend and use again.
Helen C, Uxbridge

We would have no hesitation in recommending Andrew (from Tile Doctor). He was thoroughly professional, helpful and considerate. We are delighted with the end result and our floors, both downstairs and in the bathrooms, look brand new.
James C, Clophill